“You don’t have to be wealthy to give back.” 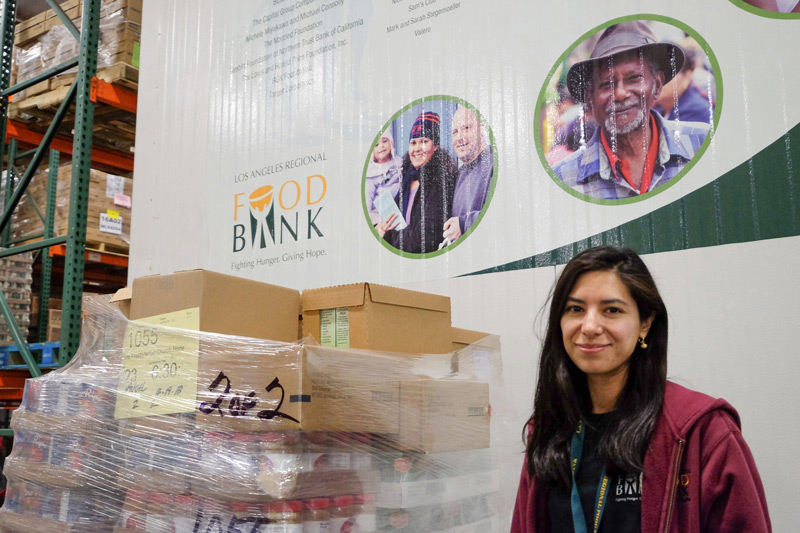 Siitch is proud to donate 10% of net proceeds from Day 1 to the Los Angeles Regional Food Bank. I’ve always been curious: does one person volunteering really make difference?

The Food Bank serves more than 300,000 individuals each month. That’s incredible, but walking into the three-hour volunteer shift one Saturday morning, the one thing I never expected to have was ‘fun.’ Eli Beltran (pictured), the Volunteer Relations Supervisor quickly divided 176 of us into two teams: one sorting produce, the other sorting canned goods. Eli started as a volunteer three years ago and is now part of a team that coordinates over 30,000 volunteers every year. Volunteering that Saturday were a handful of individuals like myself, two church groups, a high school, a sorority, members of the L.A. Men’s Soccer Team and the Big Ten Alumni Club. Within minutes we were standing around giant crates of corn, stuffing eight cobs into a bag. The corn would go to as many as 42 schools that serve hungry children in the community.

Sorting corn around the crate was Shogo Uno and Nahom Bariagaber, both Michigan State alumni. Shogo was from Japan, Nahom from Eritrea. Both had moved to States as kids: three strangers quickly sharing stories on how we got to America, and debating who’s football team was better (obviously my FSU Seminoles.) Looking around the warehouse, the same scene played out around every crate. Strangers meeting strangers. Everyone having a good time. Volunteer Regina Visocchi, the author, and a bunch of bread.

Another job was sorting bread. If the bread is edible, it gets distributed through the Food Bank’s agency network and Mobile Food Pantry. If the bread was moldy or past an expiration date, it was destined for the L.A. Zoo. It turns out the animals don’t care about mold. Regina Visocchi, another volunteer Spartan was a) hilarious b) a speed sorter. “I’ve been volunteering my whole life. The ratio of work to fun is usually weighted WAY on the fun side.” The last job was sorting clementines. The good went into boxes, the bad to the trash via a little Clementine basketball. I caught up with Eli afterwards. She’s one of 125 full time staffers at the Food Bank. She smiled saying, “We don’t hide the fact that we put you to work. Your hands are going to get dirty (not really, they have gloves) and don’t wear your best Sunday shoes,” (our sneakers did just fine.)

A long-time volunteer with other organizations, I asked Eli what made her choose the Food Bank. “You can go to breakfasts on Saturdays with friends, and that is fun. I like doing that, too. But volunteering here, there was something tactile after packing a bunch of food because you could see how much you produced in such a short time, and you know that’s going to so many kids and seniors who need it. I felt I had something to give. You don’t have to be wealthy to give back.” Here’s what a bunch of strangers achieved: all of it destined for food-insecure seniors, families, or children around L.A. County:

If you’ve ever wondered like I did, ‘does one person volunteering truly makes a difference?’ think of it in another way. 176 individuals came together that morning and packed over 20 tons (40,000 lbs) of food. Just like one person saving a little food and money for their event might not make a difference, a lot of people doing the same surely will. Our hats off to Eli and everyone at the L.A. Food Bank for their tireless work. It’s #GoodSiitch Sign up for our newsletter! We'll only send you important things that are worth a Siitch.